This is
our story

Our family-owned company, Delipap Oy, has made everyday life easier since 1979. Some of our most well-known brands include Muumi Baby diapers, Vuokkoset sanitary pads, and Helmi hygiene products, which can be found in almost every home in Finland. We are proudly Finnish, responsibly safe, and continually developing our operations to provide the best skin-friendly and eco-friendly alternatives to meet the needs of your whole family.

Our products are manufactured at our two factories in Veikkola and Tammisaari. “We bring Nordic common sense to the world of disposable wellbeing products and make the best decisions for the benefit of people and the environment. We are continually working to reduce the carbon dioxide emissions of our operations, and we require our suppliers to do the same. We use renewable and plant-based raw materials. These individual decisions may seem minor, but together they all add up to become hugely significant for us all,” explains Sanna Karhu, CEO of Delipap.

We collaborate with the Finnish Allergy, Skin and Asthma Federation, and are a leading manufacturer of hygiene products bearing the Nordic Swan Ecolabel. We bear social responsibility by considering the environmental impact of all of our operations: “We have true respect and a pure Finnish love for nature. We want to change the world by operating in even stronger balance with nature. Our aim is to bring an understanding of nature to the consumption of wellbeing products and to pass on a valuable inheritance to future generations,” summarises Karhu. 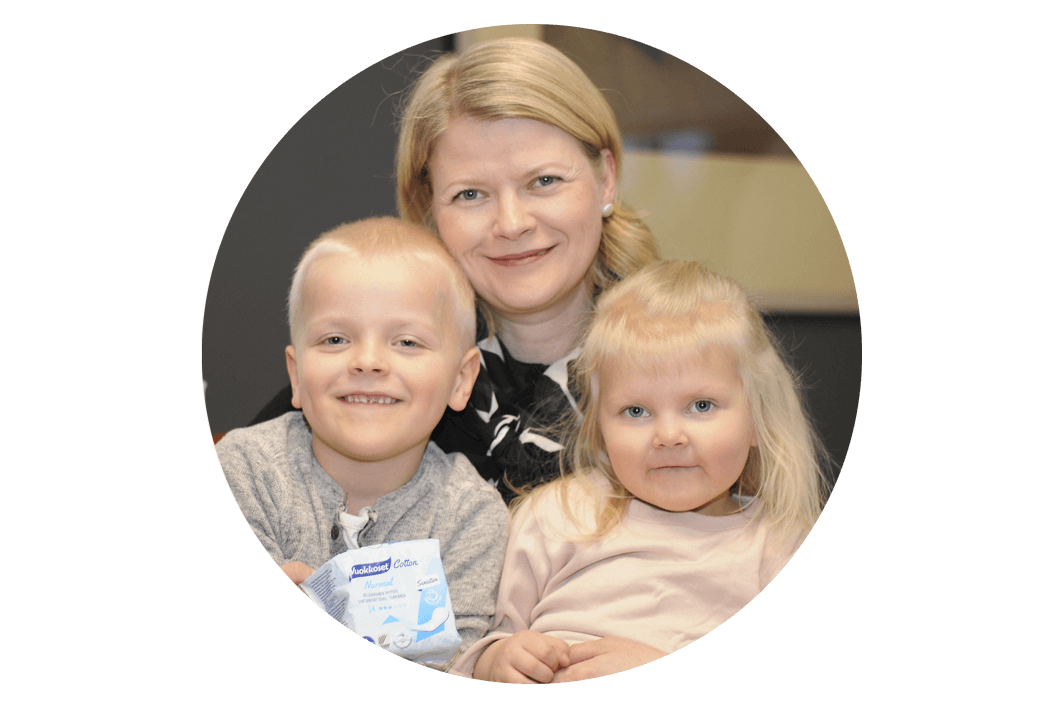 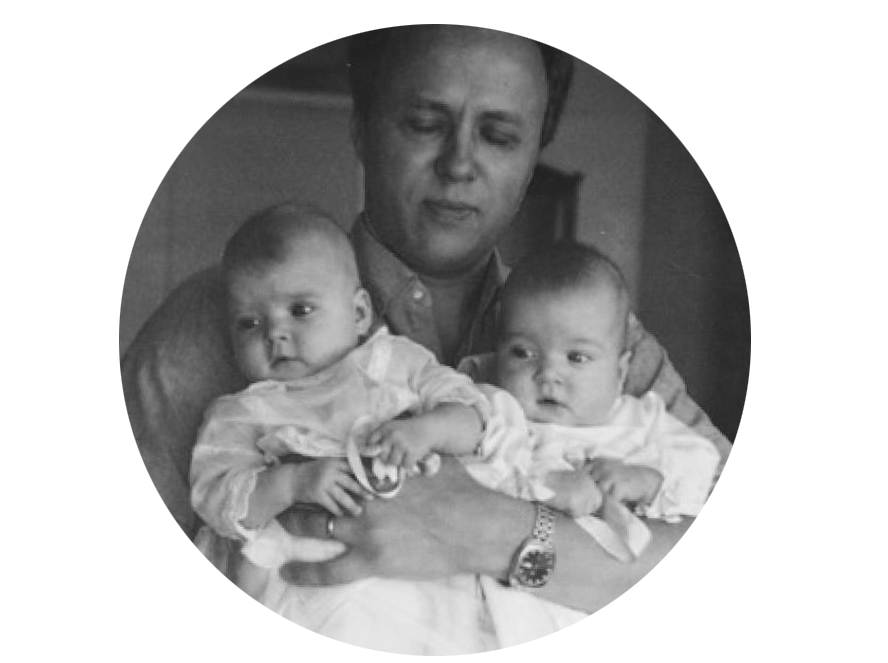 The beginning of Finnish diapers

Our company’s unique story dates back to 1979 when Raimo Nuortie, a paper industry expert and father to young children, decided to develop the skin-friendliest diaper on the market for his son, who had sensitive skin.

Nuortie opened the first factory to manufacture Finnish diapers with a new patented idea in Nummela, Finland. The raw material for the diaper was clean, new paper, which formed a soft sheet structure when crushed. As a result of this new structure, moisture was distributed evenly within the diaper.

Immediately after operations began, we stood out from competitors with our skin- and eco-friendly products, which were in a league all of their own with regard to quality. Since the very beginning, we have also been a member of the Association for Finnish Work, and we are entitled to use the Key Flag symbol to indicate that our diapers are made in Finland.

The birth of the Muumi diaper

Our children’s diapers are introduced to the market as Muumi diapers. The charming Moomin characters adorn the colourful packaging and diapers. Raimo Nuortie is a passionate art collector and sees that the values in the stories created by Tove Jansson, including respect for nature, equality, and tolerance, align well with the company’s and products’ values. These values are still relevant and present in our day-to-day operations. 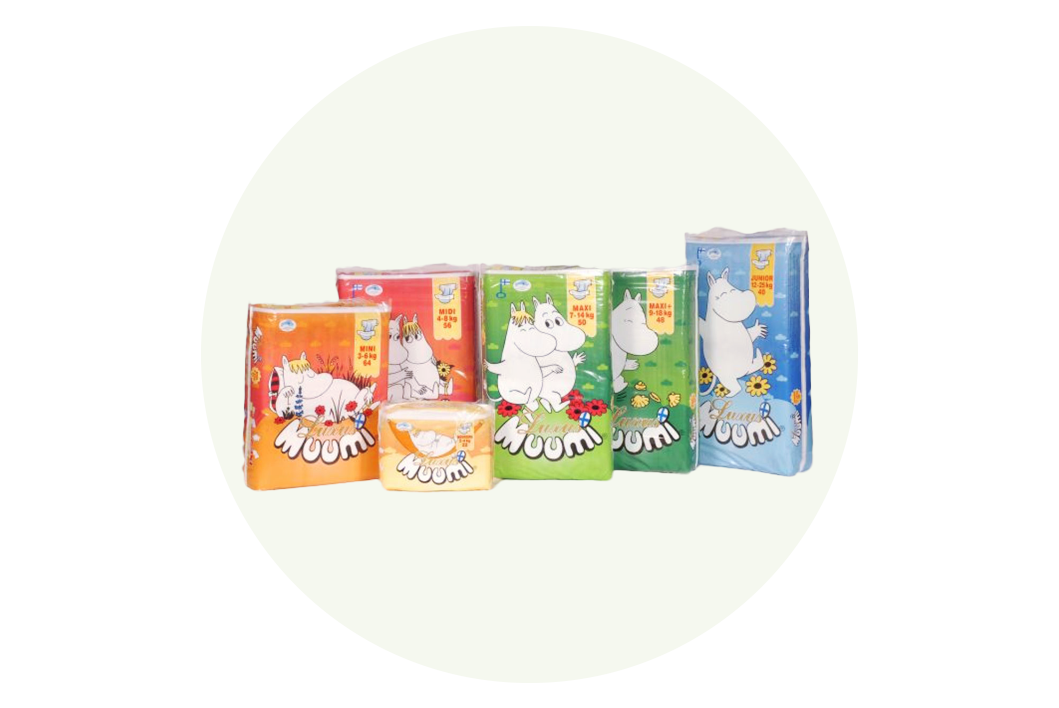 A safe choice for your baby. Muumi diapers are the first brand of diaper in the world to be given the right to use the Finnish Allergy, Skin and Asthma Federation’s symbol. The symbol guarantees that the product contains no unnecessary fragrances or additives that could irritate sensitive skin.

To reduce our environmental impact, we begin to pack Muumi diapers in biodegradable bags. The bag can be reused as a biowaste bag, for example. At the same time, the brand colour of Muumi diapers is changed to green, as we want to visually emphasise the environmental values of our diapers. 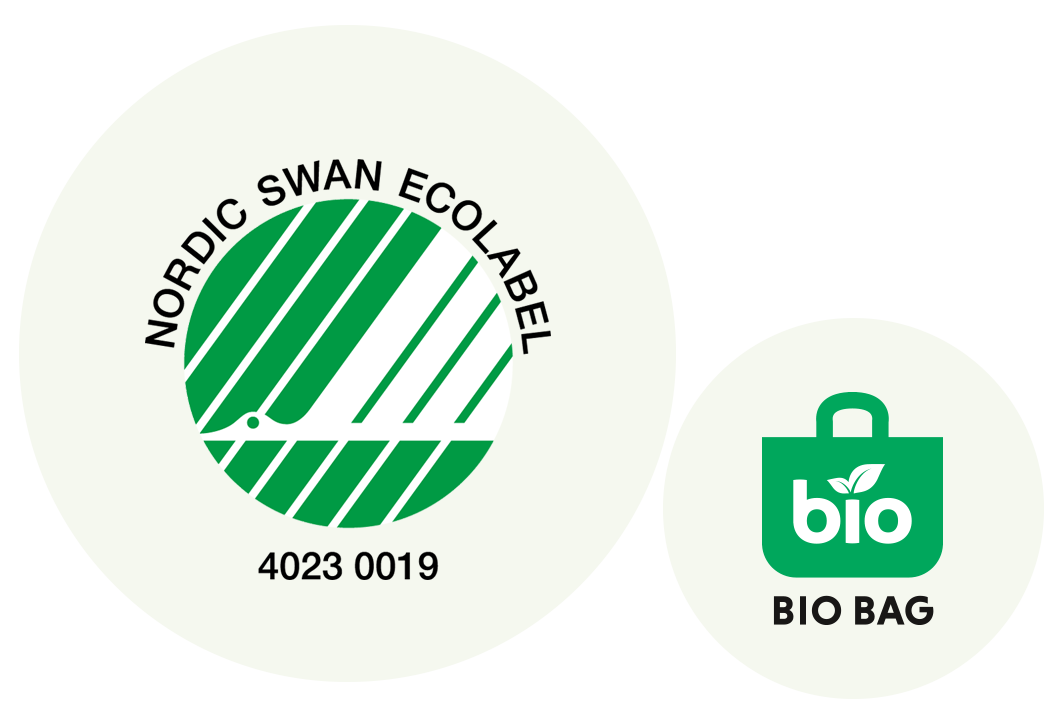 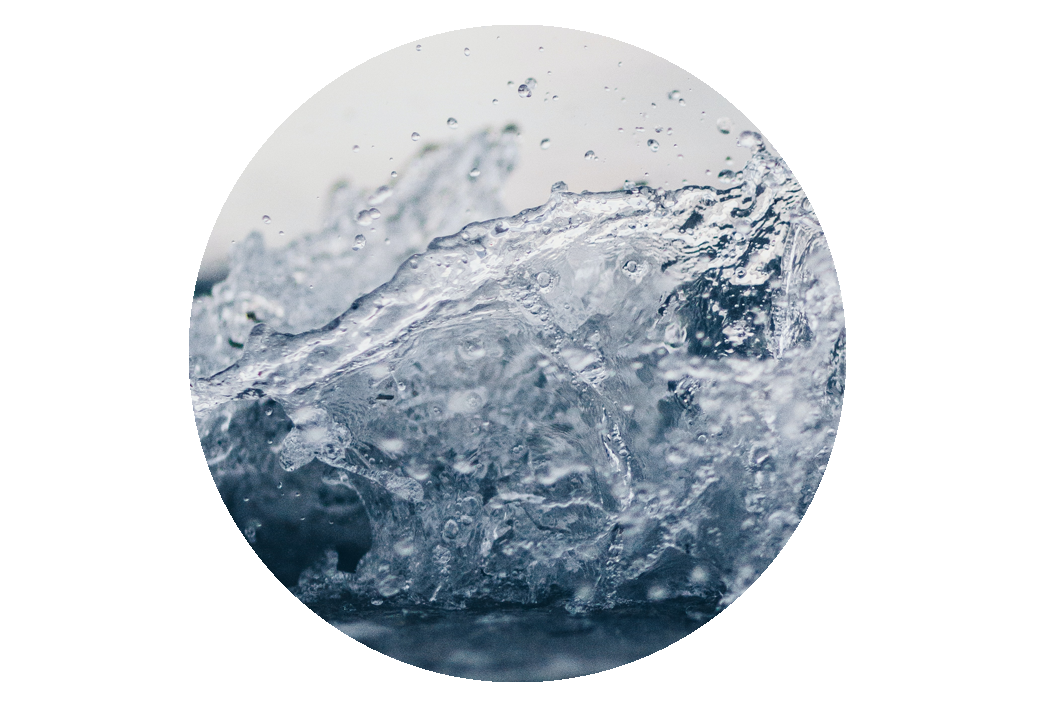 Muumi diapers switch to using only certified hydropower. Hydropower is a renewable source of energy that does not generate any carbon dioxide emissions at all.

We invest in a new open diaper machine, which is the largest investment in our history. The new diaper line creates new jobs and increases production capacity at the Tammisaari factory. At the same time, the user comfort of Muumi diapers is improved – they are even softer and higher quality. Green values remain at the core of our operations.

Launch of a new open diaper

A new open diaper machine is commissioned at the Tammisaari factory and the Muumi diaper family expands to welcome the long-awaited New Born size. The new Muumi open diapers are introduced to the market under the name Muumi Baby. 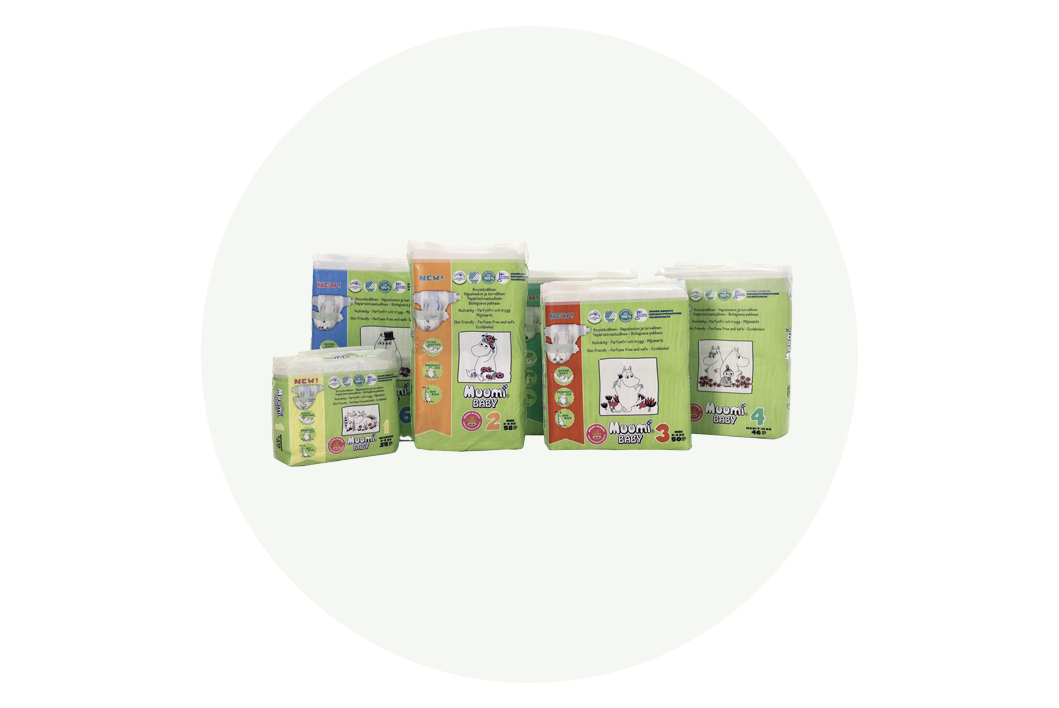 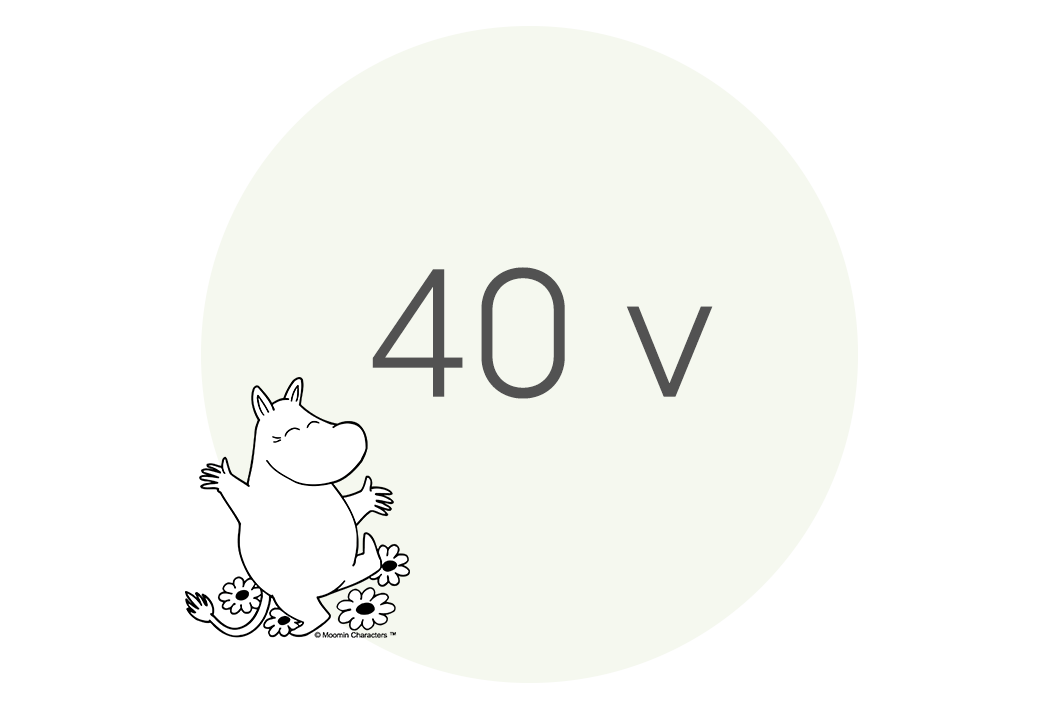 40 years of being a Finnish family-owned company

A Finnish choice for your baby. With 40 years of experience, Delipap continues to specialise in the development and manufacture of skin-friendly and eco-friendly wellbeing products. At the same time, we publish a new vision and mission for our family-owned company, with nature and tradition remaining at the core of operations.

2021 Carbon-neutral diapers and use of solar power 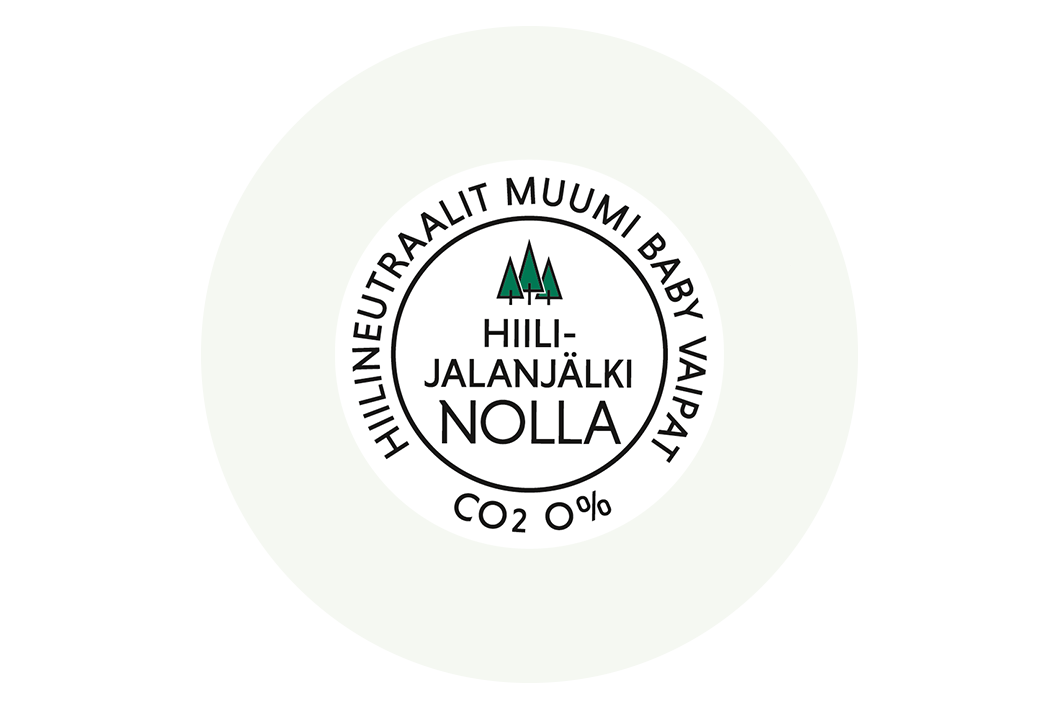 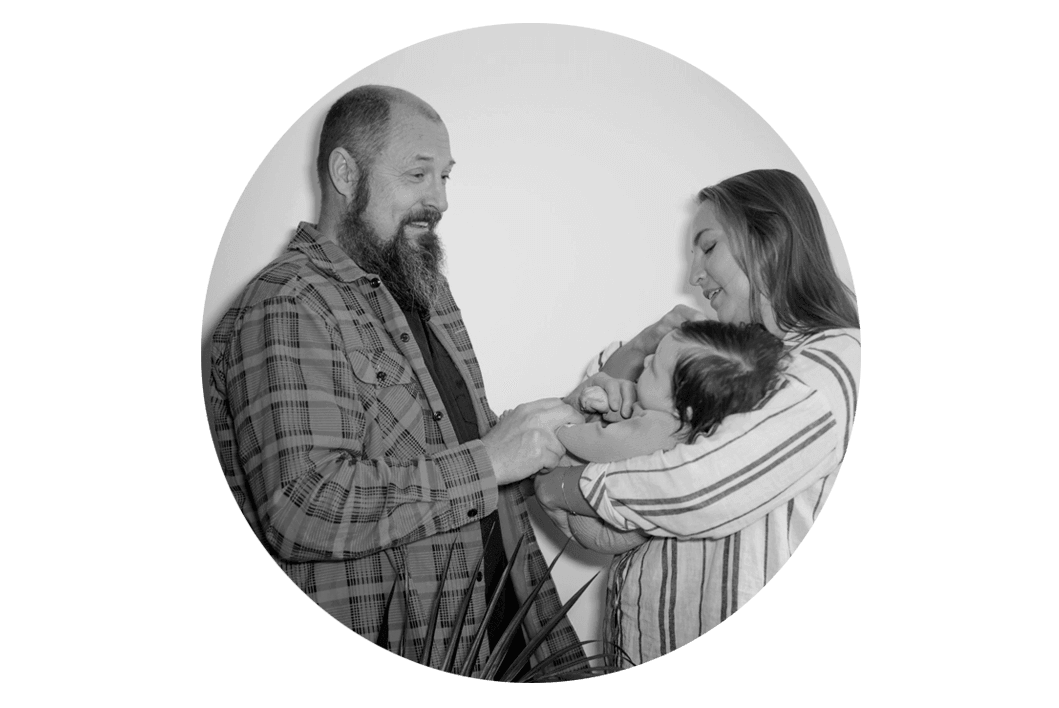 To this day, we are the only Finnish manufacturer of disposable diapers and sanitary pads. Delipap is still owned by the Nuortie family, and company management has passed to the next generation. Our company employs approximately 70 professionals in various industries, who ensure that our products are high-quality, eco-friendly, and available on shop shelves.

The company’s managing director is Sanna Karhu, the younger sister of the small boy in the story. Another sister, Riikka Nuortie, works as a production manager. The boy from the story, Oskari Nuortie, is the company’s vice president. A third-generation member of the family, Emilia Nordström, also works in production development, while the fourth generation is already hard at work testing the Muumi Baby diapers developed by their great-grandfather.